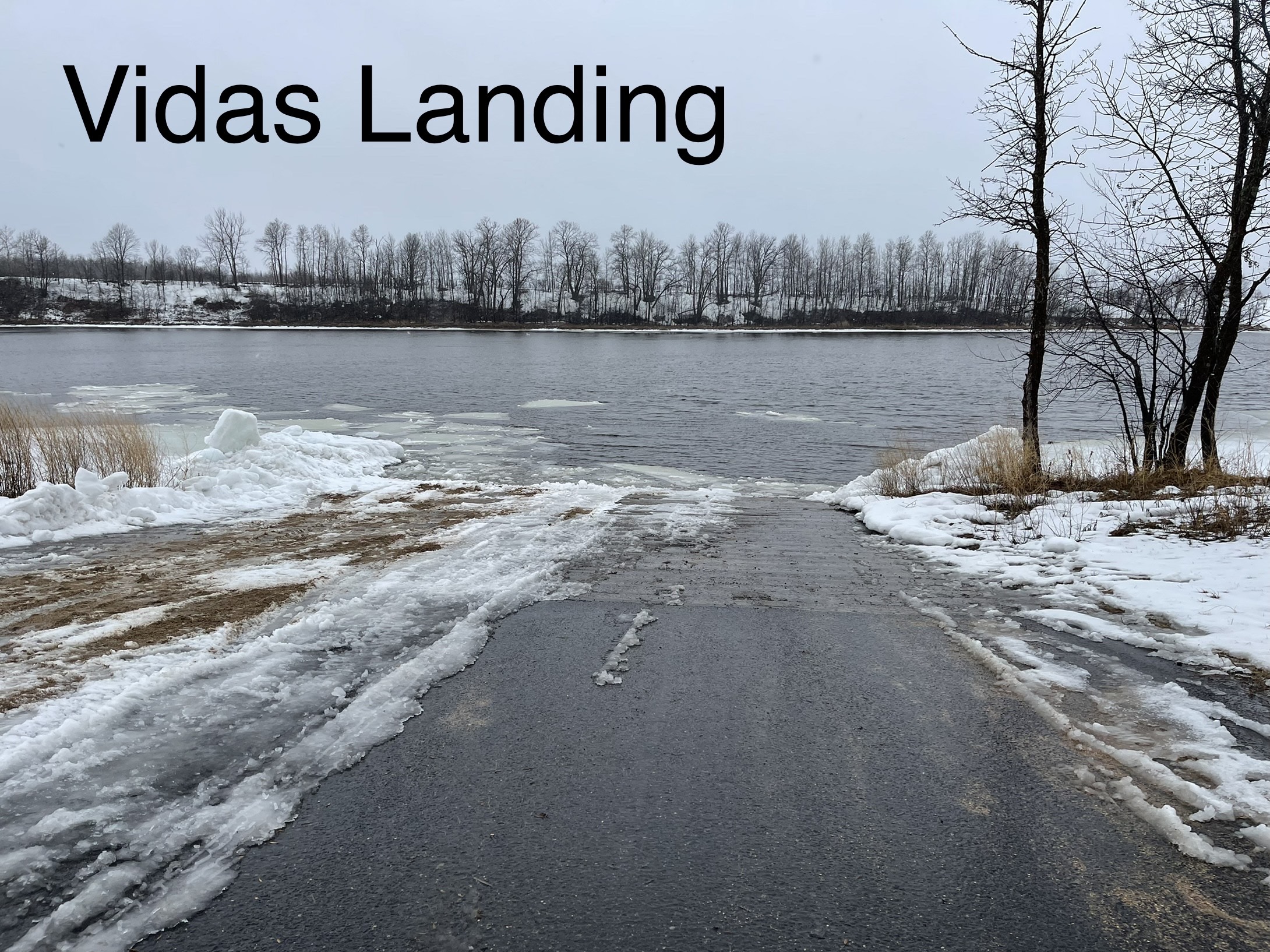 Open water is 3 miles west of Clementson and within a little over 3 miles of Baudette today. Boats are now being launched at Vidas, Frontier, and Birchdale landings. Next up is Timbermill, then Wheeler’s Point. The parking lot at Timbermill is plowed out.

15 more miles to go and we will have water at our docks.

Mother Nature is throwing us some sleet and snow yesterday and today. Hope to see the sun by Friday.

Lodging is available and our restaurant and bar will be open this weekend. Book your trip www.sportsmanslodges.com 800-862-8602

Took a drive east again today. Birchdale is open to all boats now. Here are some pics of Frontier Landing. Water is flowing past Frontier to the west about a mile or so. Still lots of ice at Frontier today but it is currently 40 degrees and 40’s are forecasted all week. Should see quite a bit of progress this week. After Frontier opens, Vidas Landing will be next followed by Timbermill in Baudette and Wheeler’s Point out by the lodge. 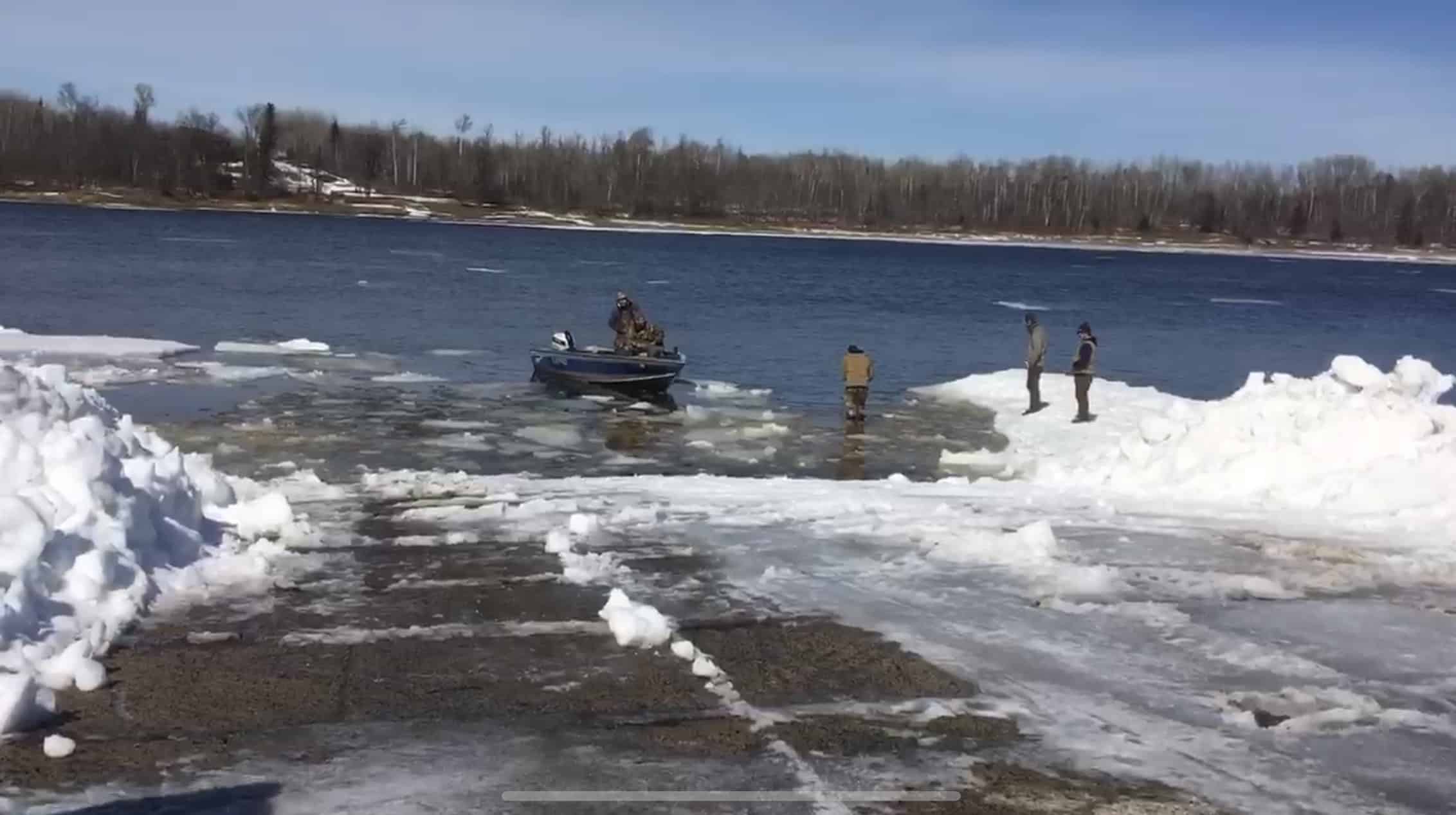 Birchdale Landing is open!
**County came out and plowed the landing but an ice shelf still remains. It is deeper on the east side of the landing than west as of late afternoon. Could all be gone within a few hours or could take a little longer. Small boats are being pushed out.
Open water is 4 miles to the east of Frontier Landing this afternoon and lots of black ice within 2 miles. Won’t be long!
The parking lots are nice and plowed at Birchdale, Frontier, and Vidas Landings, ready to go.

CLICK HERE FOR A MAP OF THE PUBLIC LANDINGS

Water is flowing in front of the lodge and 3 boats are in our view. 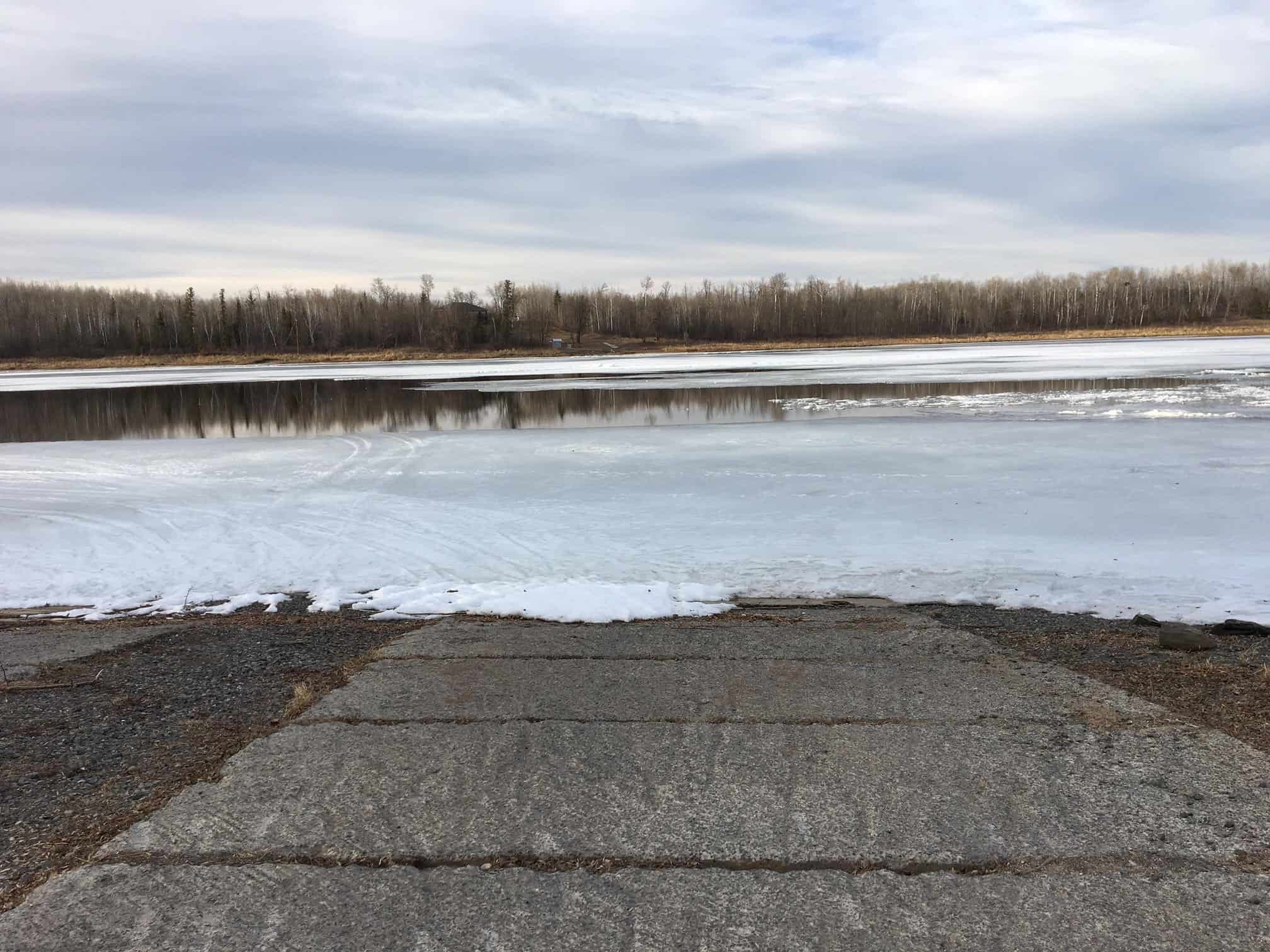 We took a drive to Nelson Landing at Birchdale this afternoon. We have open water!

We could see open water for about 200 hundred yards to the west of the landing. It won’t be long before boats are splashing in. I am sure the county will be out to clear the landing soon. Check back for another update Wednesday.

Lodging is available now, guided trips will be starting soon and our restaurant, bar, and pool are open. Spring is in the air! www.sportsmanslodges.com

Check out the latest satellite picture from today compared to Mondays!
Big changes happening here the past few days! We have not been across the lake to check it out yet, so please use caution when venturing out. It sure looks like the ice is disappearing quickly.
Opener forecast is looking good!  Woohoo! Let’s go fishing! The ice is starting to breakup more
at Timbermill Landing today!

Timbermill Park and boat landing is located on the east edge of Baudette. Baudette is located 12 miles from the lodge. Currently Birchdale, Frontier and Vidas landings are all open. Timbermill will be next and then Wheeler’s Point. Based on the forecast, we should have water at our docks in a few days!  Spring is finally here! What a crazy spring so far. We have gone from two of the warmest spring season’s to now one of the coldest. I guess that is Mother Nature for you, unpredictable. We are going to head out this afternoon and tomorrow morning and snap some pictures of what the river looks like and how far it is open to share with you tomorrow morning. We also will post another update Thursday afternoon too.

Over the weekend, the morning bite on the river was a struggle.  Temps dipped down causing some of the accesses to freeze up and then thawing late morning/early afternoon.  Some anglers went ice fishing on the lake for morning and headed to the river for the afternoon/evening soft water bite.  Still lots of ice on the lake.   Although it doesn’t appear to be time to break out the shorts yet, the forecast does look warmer for this week.  Warmer temps should help navigating the river and the increase the bite for the last few days of walleye season. Walleye season runs through April 14, re-opening May 12. Spring sturgeon catch and release season runs through April 23 and May 8-15, keep one (within size limits) April 24-May 7. Pike season never ends.  If you haven’t experienced reeling in a monster sturgeon or trophy pike, spring is one of the best times to do it. It is a blast! Give us a call, lodging and guided trips are available.

The bite over the weekend was hit and miss. Some of those who did the best were jigging with 3/8 oz or 1/2 oz jigs on the river and small jigs/spoons on the lake in 16′-24′ tipped with a minnow. Sturgeon anglers were using a gob of worms, on 5/0 hook and a few ounces of no roll sinkers in deep holes of the river.   Pike anglers using live suckers and big smelt in pre-spawn areas.  The current is slow right now. Stay tuned for more updates tomorrow and Thursday. The weather forecast looks great and we expect to start our ice fishing season soon. We are unable to get out on the lake right now to check the ice due to wind conditions and poor visibility. It sounds like the wind is going to settle down tonight and we should be able to get out tomorrow to see how things are coming along. We will post a report tomorrow as soon as we can! Stay tuned! We have trips available December through March. Make plans to join us for some winter fun today. Walleye season is finally here and we couldn’t be more excited!  We had an awesome first weekend with boats pulling in a lot of nice fish!  Fish are being caught all the way from 14’ to 23’.  Do not be afraid to move around and look for fish!  Jig tipped with a shiner seemed to be the best way to target them with the hot colors being Lake of the Woods classics, pink and gold.  With temps remaining in the high 50s low 60s fishing is looking to stay good this week!  Hope to see you out there! What a tough day for Captain Mike.  Trying to take a nice picture but cannot seem

to keep people from catching fish in the background! Captain Wes off to a hot start this year with a cooler of nice fish! Many of you know Mike Vanstrom, a guide who has been with us in the fall and winter seasons for the past 3 years. When Mike is not at Sportsman’s, Mike can be found in the southwest region of Alaska.

Mike has a love for the outdoors and in the summer season guides outdoor enthusiasts brown bear and moose hunting and king salmon fishing 300 miles west of Anchorage, Alaska on the Nushagak River the world’s largest run of king salmon. You may have recently seen the 9′ bear that is in our lobby Mike guided a customer to bag recently. If you are looking for an Alaska adventure check out Mike’s website.